If you happen to find yourself in the Czech Republic during Easter, be careful. The reason is that except for the habits and traditions which we have more or less in common with the other countries, there is one extra special Czech habit which might call up the human rights activists and cause a break up of quite a few unbreakable couples.

Well, we do have eggs. Already in your childhood you are forced to try out all kind of painting and drawing techniques, including hot wax or pungent onion, on this small, crooked, fragile thing, from which one might start suspecting that its a sort of test of the poor childs motoric abilities. And all that for what? I am asking that as a girl who experienced the injustice (see below). (But no worries, the beautiful eggs you find in the Czech Easter market do not come from a child labour).

We also have the happy-coloured spring flowers all around, fluffy cute little rabbits, tweeting shaggy chickens, home-made sweet cakes in the shape of big-eyed lambkins, and chocolate, chocolate, chocolate, but thats all just to cover the inhuman detriment, something like if you paint the walls in hospital with a merry colourful flower pattern.

So whats the deal. An innocent Czech girl wakes up on Easter Monday morning and since minute one she is afraid of the door bell. Giving up her fate she opens the door where a bunch of her male „friends“ is trying to sing a traditional song of „give us a colored egg or die“ (very loose translation..) while holding a „pomlazka“ – bundle of flexible twigs terminated with colored ribbons. While manufacturing the twig, the men always try to find the twigs as flexible as possible so that it REALLY hurts. After the song, the girl is (seriously! NOT in a game!) trying to escape, the men chase her around trying to hit her bottom with the twig (hitting as hard as possible IN A GAME). After that the girl gives them all her eggs which she was worried away with for the past week, burning her fingers with wax to come up with perfect details, only so that they break them on their way to another poor scapegoat.

In Moravia the women have gone smarter. They have developed a defense – for a song and a solid dose of „traditional“ ass-kicking, they hand out, instead of the eggs (or together with the eggs, who cares about the eggs anyway), shots of home-made high voltage plum brandy. And since the men need to go around the whole village, they are pretty well disabled beginning house no.5 (or rather no.8, we are speaking about Moravia..). Next year the lottery tickets will come to the another first 5 (8) girls and in this way the damage is done only in every 5 or more years depending on how big the village is (ok the last sentence is a pure speculation of a girl from Prague). Somewhere the girls pour a bucket of cold water on the men in the afternoon, but I suppose that it developed from the situation when a drunken husband finally returned home…

Since the Easter is said to be the major Christian holiday, now everybody sort of understands why we, Czechs, are basically atheists? And who cares about the saying that if the girl is not beaten enough she will be ugly, old, unhealthy and lonely? It was definitely made up by some clever man. Yes, we prefer Christmas, the women have chance not to be that much discriminated as a well trained man can share the cleaning hystery with her at least partly.

So, dear ladies, if you really dare  to be in Prague on the Easter Monday, leave your man somewhere in the pub and take a ride with us with a 15 % discount and we guarantee that your lovely tiny bottoms will be safe at least for 3 hours! 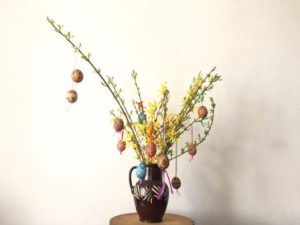